“Chancellor’s Palace – Preparatory researches and studies for the restoration work.” 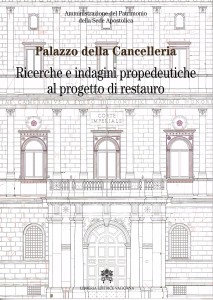 Building of Renaissance style among the best known and studied; it was built in the first decade of the sixteenth century for the Cardinal Riario, Camerlengo nephew of Papa Sisto V. Recently concluded, in 1513 it was already taken over by Pope Leo X and destined to the Offices of the Apostolic Chancellor.
The need to program  safety measures of stone cornice portions in danger of detachment and fall has become an opportunity to implement a multidisciplinary study related to the external walls of the building in order to gather all the information and knowledge useful for the preparation of a targeted intervention project.
The task included the training and the coordination of a team of technicians and experts who carried out the different cognitive activities, each according to their skills.
A focused archival research has selected historical information useful to understand the mutation of the external aspect of prospects in relation to the changes of the urban surrounding environment.
An accurate Laser Scanner relief of the surfaces  and a graphical re-elaboration of itself has allowed the monitoring and recording of valuable observations related to details and construction methods.
A series of non-destructive diagnostic investigations has contributed to the verification of the presence of metal elements oxidized and / or anomalies and separations in the structure of the cornice and in the gravestone coating. Where necessary, it has been executed a in-depth analysis through inspections of the stratigraphy of stone facings and the rear wall core.
The gravestone material and brickwork curtains, with their surface finishes, have been examined both by macroscopic observations and by laboratory investigations.
All the studied and collected data, including the relief of the conservation status of the surfaces and previous interventions, have been reported and organized on a digital mapping of the fronts, divided by themes.
Finally, some sample assays have been conducted for the development of methods of intervention targeted for different materials and different conservative situations.
The results of all the work have been collected by the A.P.S.A. in a volume published by Libreria Editrice Vaticana.