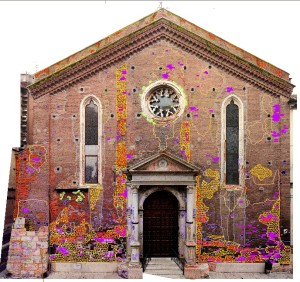 From the “everlasting construction site” to the “recurring restoration”. The project for the conservation of the outer facades of the church of S. Maria della Scala in Verona.

Essential results to define the intent strategies were: the discovery that part of the facade lining is a liner which hides and incorporates the former structures rather than a masonry; the detection of a massive presence of soluble salts as a cause of the widespread disintegration of mortars in both the masonry and facade cladding, which could seriously jeopardize its static sealing; the correct reading of the various lateral and plain components of the vestments along with the intentional surface treatments and films, witnessing the different construction phases and the intention to exalt, accord and/or protect the architectural fabric in its material and chromatic components.

Both the structural and the surface interventions have been calibrated in order to use the minimum requirement water to avoid the growth of proliferation-related disruption phenomena, above all of chlorides and nitrates.

In the first case, the detached clay curtain was tied to the back wall through a mechanical anchoring systems rather than infiltration and saturation of detachment with hydraulic mortars; stainless steel bars were inserted in metal filters with a 45 ° inclination for a depth of about one meter. The metal filters made it possible to cast the resin useful to tie the various elements without it being dispersed in the interstitial space.

The surfaces cleaning was carried out cautiously by degrees and paying the closest attention to keeping traces of the chromatic and protective treatments identified; where necessary, the blends dispersed in aqueous media were kept in contact with the surfaces through supporters which reduced the wettability and the minimum time needed to seek the desired effect.

Lime water infiltration, plastering, plating and crosslinking of joints that had undergone heavy loss of material have been entrusted with the responsibility of restoring cohesion to muds and closing access and preferential ways of flooding the mire waters. The presence of such a high concentration of soluble salts, the use of absorbent chemicals such as ethyl silicate, which was limited to preconsolidation phases, was advised against.

For an in-depth analysis, see also the publication of the Acts of the Bressanone Study in Science and Cultural Heritage XXIV, 2008 – Restoration of restorations

Texts and boards  handled by: